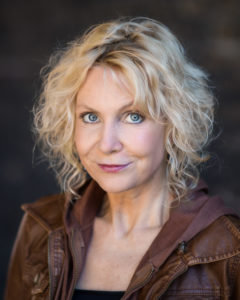 Classically trained, Aenne has played roles from Shakespeare, Schiller and Ibsen to contemporaries like Thomas Eccleshare and Christine Brückner. Aside from working with many theatre companies, she’s also worked in film, primetime TV and extensively as a VoiceOver artist.

Aenne received a Diploma in Solo Acting by the Guildhall School for Music and Drama, London, and continues her training for stage and film/TV by attending courses with teachers like Stewart Pearce (Shakespeare’s Globe), Bill Homewood (RADA), Terry McMahon (Patrick’s Day) and Vinny Murphy (The Lir – National Academy of Dramatic Art, Ireland). She also holds several Certificates in Stage Fighting, her favourite weapon being the Broadsword.

In 2019 Aenne worked on THE PROFESSIONALS, a new TV-series with Brendan Fraser,  and also played the female lead “B” in the play HEATHER which toured into 2020 before being cut short due to the Covid-19 pandemic.

Previously Aenne filmed the part of ‘Beth Riley’ in the TV-movie Inspector Jury – Help The Poor Struggler (Lichtet den Nebel) for ZDF/ Germany and ORF/ Austria as well as the part of ‘Moira’ in Graham Jones feature film Davin. She worked on The History Channel’s famous series VIKINGS, playing the part of ‘Poet’. Aenne played the part of Samantha Ballantine in the feature The Hit Producer which claimed eight prizes, including the coveted Awards of Excellence and Best Feature at the IndieFEST Film Awards in California as well as the Gold Remi Award at the 48th Houston-Worldfest International Film Festival and which was nominated for the Premio Mezcal at the 2015 Guadalajara Film Festival. The Short Film THE LAST FARE by Siobhan Perry, in which Aenne plays the lead, has received a Special Commendation at the Belfast Film Festival 2014. On stage she also played ‘Queen Elizabeth I.’ in Friedrich Schiller’s classic Mary Stuart, the eerie “Professor Coppola” in the play OLYMPIA  and the part of ‘Gila’ in AC Productions acclaimed production “Pinter X4”, which was nominated for Best Production at The Irish Times Theatre Awards.

Looking forward to working in the next Netflix series or in any feature opposite Brendan Gleeson or Jason Isaacs!