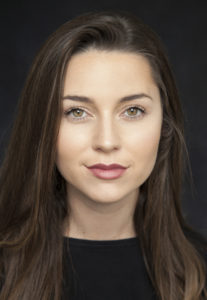 Slaney has just finished filming BBC3’s NORMAL PEOPLE directed by Lenny Abrahamson where she plays the role of Sophie.
She originally trained at The Irish College of Music Theatre in Dublin where she holds a diploma level 7 in Musical Theatre as well as at The Bow Street Academy for Screen Acting.
Stage credits include Stephen Sondheim’s Putting it Together in which she played one of the leading roles while working with Director Christine Scarry and MD David Wray. (The Pavillion Theatre Dun Laoghaire)
‘No when‘ as part of the MA theatre practice in assocaiton with The Gaeity School of Acting (The Boys school Smock Alley Theatre)
Other theatre credits include Kander and Ebb’s Cabaret (The Helix), Miss Saigon (The Watergate Theatre), and Disney’s Beauty and The Beast,  in which she played the lead role of Belle (The George Bernard Shaw Theatre).
Slaney’s film credits include short films: The Anderson Corporation Will Change Your Life directed by Kealyn Ryan, award winning short, Breastfriends (directed by Eleanor Rogers, IADT), Banjaxed (directed by Orlaith Darcy as part of the IADT graduation films) and Somewhere in the Past (directed by Fabiano Albuquerque Negative Space Productions) in which she plays the title role of Mary.
Music video’s include Kingdom of Crow’s The Drip (Blue Hue Productions), Kim Hayden’s Closer (BadBear Productions), The Stoles Evelyn (Negative Space Productions)
Aswell as acting Slaney is a singer and she also plays guitar while writing her own original songs.