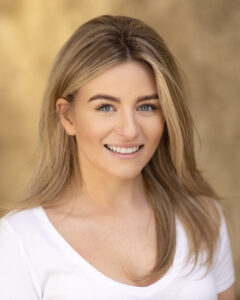 Mella trained at the Independent Theatre Workshop from the age of four in dance, drama and musical theatre. She went on to study screen acting at Bow Street under the tuition of Gerry Grennell.

Mella is trained in both Classical and Musical Theatre singing where she studied at The Royal Irish Academy of Music and The Conservatory of Music. She has played various leading roles in professional Musical Theatre productions including ANNIE and THE SOUND OF MUSIC at the National Concert Hall and RENT, where she was cast as Mimi.

Mella also plays piano and violin and is a singer songwriter who is kept busy performing with her band, CARRON. She has performed at Electric Picnic and supported The Coronas in London at the London Fleadh. She has also recently performed at The Irish Embassy in London.