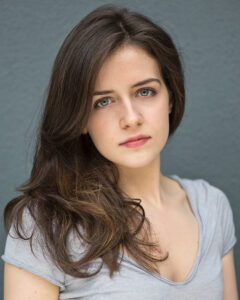 Lauren is a graduate of American Academy of Dramatic Arts in New York. When she returned to Dublin she trained at Bow Street Academy.

Most recently Lauren filmed and performed a one woman play for the Fight Back Festival called THE JAR which has been awarded an OnComm – by the OffWestEnd Offies awards to recognise the best work that is now being presented online or broadcast during the Covid-19 lockdown.

Theatre highlights include playing Dedalus in PORTRAIT OF THE ARTIST AS A YOUNG MAN directed by Jimmy Fay which toured nationally as well as playing The Lyric, The London Irish Centre, Camden, Centre Culturel Irlandais  in Paris and Clwyd Theatre Cymru, Wales.

‘Dedalus, the young man in question, is played by a young woman (Lauren Farrell) who brings both an incredible physical agility and an inquisitive gentleness to the role of one of Ireland’s best-known artists.’  Irish Theatre Magazine.

She also performed a one woman play THE EDGE OF OUR BODIES by Adam Rapp at Smock Alley which then went on to play the Edinburgh Fringe.

‘A poised, charismatic performance’ The Scotsman