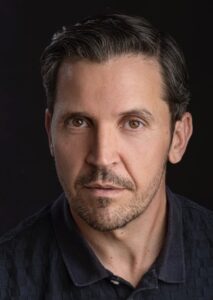 Mark is originally from Belfast and now lives in Dublin. In his forties, he decided to turn his hand at acting. He embarked on some training at  The Lir Academy and a six month acting for camera course at Bow Street Academy .
Since then Mark has had supporting roles on TAKEN DOWN (RTE), BLOOD Season 2 (Virgin Media) and the drama documentary I DOLOURS directed by Maurice Sweeney. He played Sammi Flynn in the short film SHEPHERDS as well as appearing in several music videos for Lilla Vargen, Fears and Fontaines DC.