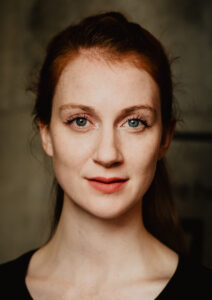 Louise is a graduate of Royal Holloway, University of London and The Acting Studio in NYC.

For TV she has worked on productions for BBC (Ups & Downs, Come Home, Worst Halloween Ever) and ITV (The Frankenstein Chronicles). Louise played the lead role in short film Demons Before Breakfast which opened the 2020 Chicago Sound of Silent Film Festival.

Her work in theatre includes Mistletoe & Crime and Christmas Eve Can Kill You at the Lyric Theatre Belfast and the role of Molly Bloom in an adaptation of the final chapter of Ulysses for Belfast Book Festival.

She enjoys acting for radio and credits include A Run in the Park and The Haunted Road for BBC Radio 4. Louise also adapted and voiced Kate Chopin’s A Pair of Silk Stockings (Tinderbox Solo Art Project), which was subsequently broadcast on BBC Radio Ulster.

Louise is the recipient of an Artist’s Career Enhancement Award from the Arts Council of Northern Ireland, which has allowed her to research and develop her own play with the assistance of Kabosh Theatre Company.